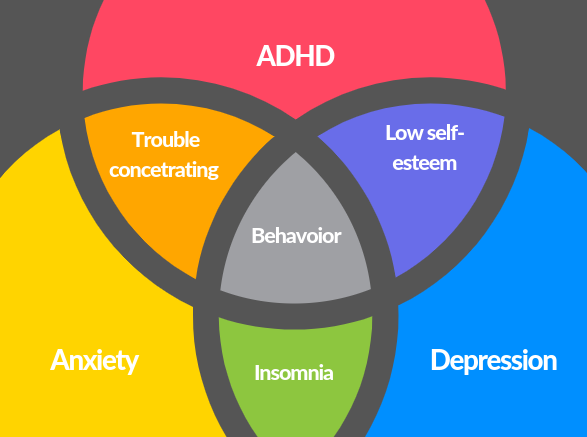 Anxiety is a major mental illness that one and three teens suffer according to Claire McCarthy, a renowned doctor Anxiety is considered a normal part of life but people with anxiety disorders suffer significantly. Most people with anxiety disorders also get panic attacks regularly because the anxiety and terror that comes normally reaches its peak within minutes. The disorders also interfere with everyday activities such as going to school, making friends, talking in class, or just being social.

There are six major categories of anxiety disorders fall into: Generalized Anxiety Disorder (GAD), Agoraphobia, Social Anxiety Disorder, Specific Phobias, Panic Disorder, Separation Anxiety Disorder. Some common symptoms of these disorders include: feeling nervous, tense, or restless, having a sense of impending danger, increased heart rate, hyperventilation, sweating, trembling, feeling weak or tired, trouble concentrating about anything besides the present worry, trouble sleeping, the urge to avoid things that may cause anxiety, and difficulty controlling worry(verywellmind).

The cause of anxiety disorders is still unknown but they do know some causes that are linked to anxiety. Some are caused by medical problems. The medical causes are heart disease, diabetes, thyroid problems, respiratory disorders, drug misuse or withdrawal, withdrawal from alcohol, withdrawal from some medications, and rare tumors. Though there are also risk factors that may cause you to get an anxiety disorder, they include trauma, stress from an illness, stress buildup, personality, other mental health disorders, family members having a disorder, and drugs or alcohol(mayoclinic).

Anxiety may also cause you to get other mental and physical problems. And if you already have other mental illnesses having anxiety can worsen the illness. Some of the mental and physical problems are substance misuse, problems functioning at social places, headaches and chronic pain, suicide, digestive problems, social isolation, and a poor quality of life. Although anxiety does come hand in hand with many other mental illnesses such as depression. Depression is also common in teens as between twenty to thirty percent have been reported to have depression. It can be described by persistent feelings of sadness and loss of interest in liked activities. It affects how people think, feel, and behave while also causing emotional, functional, and physical problems.

When asked what having depression felt like freshman Zeretta Francisco replied with, “It’s really crappy by itself but when mixed with anxiety it’s like a divorced couple fighting over what’s best for their child without realizing that they’re actually making their child feel worse.”

The symptoms of depression can vary in severity for each person with the illness. Though the severity depends on the harshness of the disorder, your environment, or if you are getting help for your depression or not. There are two major categories for the symptoms, emotional changes, and behavioral changes.

The symptoms that are categorized as emotional changes are feelings of sadness that may lead to crying for no apparent reason, frustration or anger over small matters, feeling hopelessness or empty, irritability, loss of interest in activities, loss of interest in family or friends, conflict with family or friends, low self-esteem, feeling worthless or guilty, fixation of past fails, exaggerated self-blame or criticism, extreme sensitivity to rejection or failure, the need for constant reassurance, trouble concentrating, an ongoing sense that life and future are grim, and frequent thoughts of dying, or suicide (verywellmind).

The other categorized symptoms are behavioral and they include tiredness, loss of energy, insomnia or sleeping too much, changes in appetite, use of alcohol or drugs, agitation, restlessness, slowed thinking, speaking or body movements, unexplained body aches, and headaches, social isolation, poor performance in social situations such as school, less attention to personal hygiene and looks, angry outburst, disruptive behavior, self-harm, making a suicide plan and attempting suicide(mayoclinic).

When these signs are shown it’s best to see a doctor to determine whether or not you have depression because without treatment the symptoms won’t get better and may cause other mental illnesses or physical problems.

The causes of depression like other mental illnesses aren’t quite known but some issues are shown to be involved. Such as peer pressure, academic expectations, puberty, brain chemistry, hormones, inherited traits, early childhood trauma, and negative thinking.

There are also risk factors associated with teens getting depression and they involve: issues that negatively impact their self-esteem, being a witness or victim of violence either physical or sexual, having other mental illnesses, having a learning disability, having ADHD, having chronic physical pain such as cancer, diabetes, or asthma, having certain personality traits like low self-esteem or being pessimistic, abusing alcohol or drugs, being a part of the LGBTQ community in a non-supportive environment.

Though family history also poses a large risk factor in getting depression just as it is in getting any other mental illness. Family history risks include having a blood relative with depression, bipolar disorder, or alcohol use problem, having a family member that died due to suicide, having a dysfunctional family, major family conflicts, and having dealt with recent stressful life events such as parental divorce or death of a loved one.

A doctors’ diagnosis is different for each depressive disorder but usually has the same fundamental qualities. Although for major depressive disorders the doctor can only diagnose you after you experience five or more symptoms for at least two weeks. After being diagnosed the treatment given is a combination of both psychotherapy and medication.

Another disorder that comes hand and hand with both anxiety and depression is ADHD. Like both anxiety and depression are very common which is shown by the fact that 3.3 million teens suffer from it. ADHD is actually called attention-deficit/ hyperactivity disorder and is one of the most common neurodevelopmental disorders. It has three subtypes predominantly inattentive, predominantly hyperactive/ impulsive, and combined.

Predominantly hyperactive/ impulsive disorder are fidgeting with hands or feet, squirming in a seat, difficulty staying seated, in constant motion, run/ climb around in inappropriate situations, trouble doing an activity quietly, talking too much, blurting out answers, difficulty waiting, and interrupting or intruding on others(cdc).

The teens with ADHD often have more struggles to get through than the teens without the disorder. Those struggles involve struggling at school which can lead to failure and judgment from others, they tend to have more accidents and injuries, have bad self-esteem, have trouble interacting and being accepted by others, and are at an increased risk of alcohol and drug abuse.

“My mind and body are always moving like a whirlwind all the time and i can’t do anything or get anything done without getting sidetracked,” said Brean Detert a junior when asked about how she feels as a teen and student with ADHD.

ADHD is a chronic disorder meaning that it requires ongoing treatment. This treatment includes behavior therapy and medication. Although for some symptoms can lessen with age but for most people never outgrow their ADHD symptoms.

The three of these disorders are closely related to each other and extremely common for teens though females are more likely to develop anxiety and depression while males are more likely to develop ADHD. They are all very harmful for teens even if they don’t realize it because these disorders cause them to distance themselves from doing important things as it affects every part of their lives. It affects their home life, school life, social life, being with friends, and their overall behavior. So it is extremely important for teens to recognize the fact that something could be wrong and that they need help because without it you could suffer terribly without treatment.