“The Confidence to Speak Up and Stand Out” 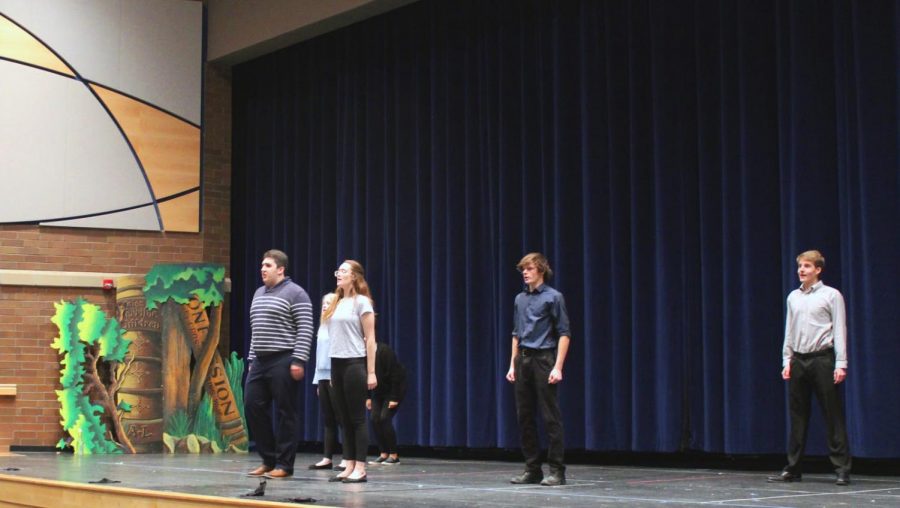 This year, Speech gave CCA students the chance to escape the hard challenges of life and just be teenagers again. Now more than ever, speech provided participants the opportunity to express themselves and come out of their shells.
“It teaches young adults to communicate more efficiently and effectively. Speech lays a foundation that will serve young adults as they grow into the leaders of tomorrow,” said Head Speech Coach, Christine Maas.
Speech practices started a couple of months ago and the showcase was on the night of January 21st. Later that same week, District took place on Saturday, the 23rd. Like many other activities for school, this year was a little different. In previous Speech seasons, during competitions, more rooms would be used for events. All competitors for an event would perform after one another; however, Covid-19 has changed that this year. The system they had formerly had had hundreds of people running around to different rooms. In these times, it wasn’t safe to put so many people at risk.

“It just wasn’t possible in a pandemic situation,” Maas admitted. “This year, schools could either host their own contest, record and send in each piece, or join with a small handful of other schools to compete.”

Although this year isn’t ideal, the CCA Speech crew is doing their best to make the most out of it. A couple of Speech students shared how these changes have impacted their season.

Senior Zaid Rachman voiced, “I wish there were more chances to perform this year other than Districts and State. The pandemic limited how we perform and how many times we got to perform.”

Another senior, Laurel Preston, expressed, “Well we have to wear masks at practice and when we are singing and dancing. Like what you have to do for musical theatre; it gets a little hard to breathe so that has been a struggle,” Laurel voiced. “You also can’t see the other person’s face which makes it slightly difficult to play off of them when acting. But I am just so thankful that we get to do speech this year so I will take these minor inconveniences just as long as I get to be a part of speech.”

Recently, it has been a little difficult to practice and perform. As the school year continues, some classes and groups are being quarantined due to exposure to Covid-19. Right before the showcase, several individuals participating in Speech were quarantined. Luckily, the Speech groups were able to act fast and make do with the people they had.
“The students did a great job trying to be flexible and understanding when someone had to come virtually or miss altogether,” said Maas.
Many coaches and students of Speech have a love for acting or singing. Senior Laurel Preston, conveyed, “I enjoy speech because it allows me to do what I love. I have a deep love for acting and singing. Being a part of the musical theatre and ensemble groups really helped me grow as a performer. Not to mention I get to practice and hang out with my friends the whole time.”

Laurel has been a member of Speech for quite a long time. She recounts how she ended up joining. “At the beginning of sophomore year, Tracy told me that I was to be a part of musical theatre, giving me no say in the matter. And I am glad she did. I was a shy underclassman and would have probably said no, given the choice.  I did not start ensemble until my junior year when Maas said that she wanted me to audition for ensemble. Both groups have been so much fun and I love working with both Tracy and Mrs. Maas.”

Zaid Rachman, another Senior here at CCA, told his story of how he ended up joining the group. “I enjoy Speech because I get to hang out with a bunch of my friends to work on a fun project or performance.  I started Speech for that specific reason.  During my freshman year, my friends and I were already doing improvs of our own at home during the summer.  Once we saw the flier for improv we knew that we were going to join.”

For Grant Elsbernd, he has high hopes for the future of Speech.“My hopes for Speech this year and in the future is that we continue to grow the program and get kids involved.  I hope that the students involved are having fun, becoming better actors and communicators, and most importantly growing and becoming better people.  It is really exciting for groups and individuals to get All-State nominations, but if participants aren’t growing and learning, then a division I rating or an All-state nomination doesn’t mean very much.”