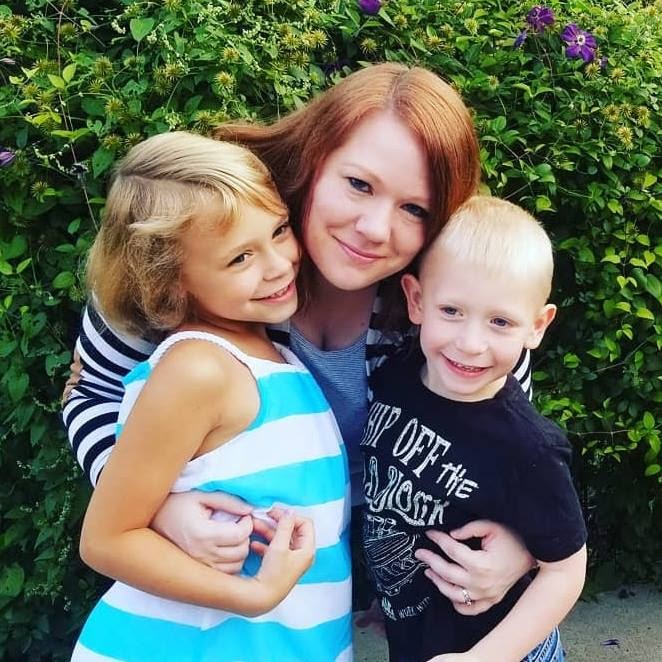 Staudt pictured with her kids.

Mrs. Staudt is one of the teachers here at CCA that works tirelessly. She has been teaching students like us for eleven years. She is one of our German teachers but she wasn’t always a German teacher. She used to teach English, reading, and Special Education at CCA.  She, like all children, had crazy childhood job dreams but since Junior High, she has known that she wanted to be a teacher.

But she is also many other things, a wife, a mother of two kids, a pet owner of four animals. She has a daughter Allie and a son Gabe, but she also has a dog named Blitzen, and three cats Donnie, Winnie, and Gracie.

But before her children and her husband, she was a Schlesselman which is how she got her high school nickname. Because it sounded similar to the icee drink, people called her “Slushie.”

During a sad day she got one of her favorite memories. She is a huge Tom Petty and the Heartbreakers fan and he passed away when our seniors were freshman. It was her first year teaching German and because she was sad over the loss she played the class some of his songs, they didn’t really know who he was. Then she played Free Falling and the whole class knew it and sang along. She had said that, “So that was probably one of my happiest memories is like, a day when I was really sad about losing my favorite artist, my students were there and they were singing with me.”

There are many things that make her happy, such as seeing kids open up, being successful, and seeing people doing good things in the world. There isn’t anything that really angers her but when she tries to help a student and they don’t want to be helped even when they say they do, it frustrates her. Some other things that frustrate her such as her pet peeves are people using the ‘r’ word and people making fun of the German language when she is teaching it.

The thing that keeps her motivated is knowing that there are kids in the school that want to learn and be taught. She said that, “If all my students just were negative and didn’t want to do anything it would be a lot harder to come to school everyday and teach.” This lead into one of her biggest fears which is her not being useful anymore. In general though her biggest fear, like all parents, is something terrible happening to her children.

If she could have any superpower for a day for any purpose it would be to stop time. Which is a great superpower for many reasons such as the one she wanted to power for. Those were napping when she needed to, making sure she could be calm and making sure that she could always be prepared for things. Which as anyone can attest to those things are important things to be able to do.