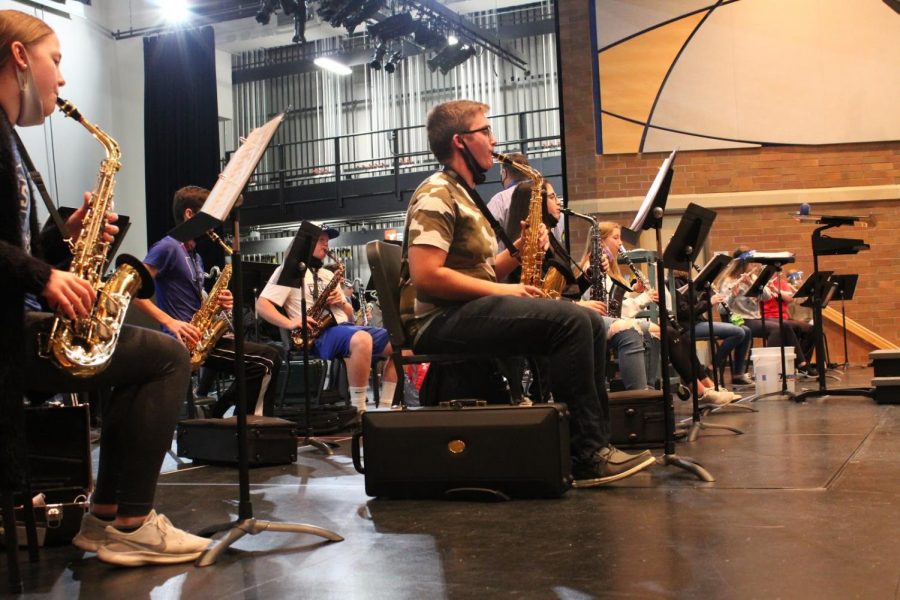 Band members practicing with the new COVID guidelines in place.

Like many other extracurricular activities, the band season at CCA High School has had to adapt this year due to COVID-19. This has impacted all band students, teachers, and parents. Though this year’s band season is not normal, the band teachers have made it so students and parents can still enjoy this year while still being safe.

To start off, let’s look at the first season of band. Marching band is “one of the greatest things you’ll do in high school,” band teacher Mrs. Williamson said. Sadly, because of new safety concerns, a marching band season became more complicated. “We finally had to abandon that idea when we found out how students would be attending school. So we quickly switched gears to a pep band format for students who wished to be involved,” Mr. Smith, another band teacher, informed.

“I think I speak for all band members when I say that we miss the marching season.  For a lot of us, it was the main reason why we decided to join band,” senior band member Zaid Rachman said. Though they might not get to experience a band season this year, pep band was a great substitution and is just as fun.

“Pep band is probably the most enjoyable part about band this year. You can still hang out with all your friends that are in the band.”

Not surprisingly, concert band has also had to undergo some changes for it to be safe. Normally the season would have started mid-October, though this year they were able to start at the beginning of the school year. In the past, bands were divided by auditions, though this year the students were divided into bands based on which group they attend. Besides that, correct social distancing, special masks, and bell covers are also new requirements.

As for concerts, Mr. Smith is hoping to be able to plan a concert every three months for this school year. They plan to have the AM and PM group play concerts on the same day but at different times. A thirty-minute break in between the concerts will be used to clean and disinfect the auditorium. Seating inside the auditorium will have to be limited, though he is hoping to live stream both concerts.

Some extra band groups in high school are still planning on having a season. For example, the band teachers are preparing for the start of Jazz band rehearsals. The precautions will be similar in social distancing, using masks, and bell covers. The teachers are hoping for some good competitions this year and making the most out of it.

These changes might not be ideal, but they still give the students a fun learning experience. Band is definitely not something that the students would want to miss out on this year. Although the senior band members might be bummed that a marching band season couldn’t happen, they are still happy to have this last year with the band. Advice from senior band member Zaid Rachman, “Enjoy band while you have it. It goes by fast and for some of us, it went by faster.”