“A magnificent introduction to an enchanting Series”

Eye of the World Book Review 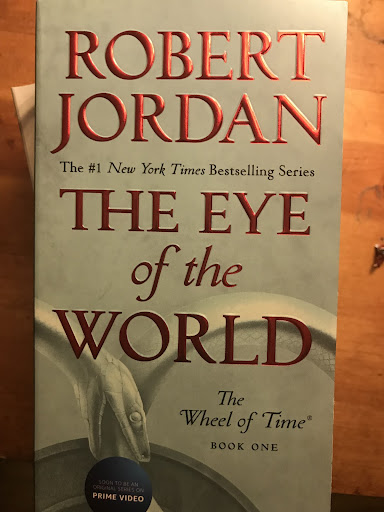 Copy of Eye of the World by Robert Jordan, published in 1991

Eye of the World is the first book in Robert Jordan’s critically acclaimed series “The Wheel of Time.” The book follows Rand al’Thor, a nineteen-year-old sheepherder from the small village of Emond’s Field, who must leave his home in order to protect those he loves from forces of darkness.

Overall Eye of the World was a magnificent introduction to the enchanting world of The Wheel of Time. The characters, notably those of Mat, Perrin, and Egwene, were especially unique subversions of their given archetypes with Mat being a rebellious troublemaker, Perrin a gentle giant, and Egwene a girl next door type. On the other hand, Rand lacked any unique qualities for most of the book, but towards the end, he really grew on me due to his introduction to the world outside of his small village.

The pacing of the book fluctuated throughout. The beginning moved at a pace that kept me interested but did not give too much information at once. The problem I found with the pacing was the long stretches of characters traveling. I felt that the scenes seemed quite repetitive and could have been condensed, but they allowed us more insight into the characters’ relationships with one another and the growing bond between our Emonds Fielders, with the new character they meet along the way.

The plot of this book made a lot of sense to me toward the end, but there were a lot of plots opened with the obvious intention of them being resolved in other installments of the series; this is good because it connects all parts of the series together in a really interesting way, but it was slightly confusing upon my first readthrough.

In conclusion, Eye of the World is an excellent first installment to this critically acclaimed series and holds up even after nearly 21 years since its publication. Although the series is long and may seem daunting to first-time readers, the first novel at least is a must-read for any fantasy lover.