FFA off to a great start this year at CCAHS 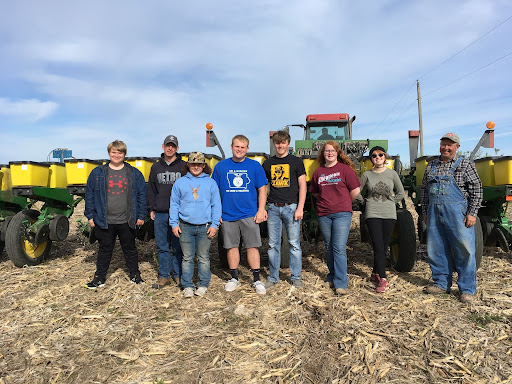 FFA originated in Kansas City in 1928. One year later in July of 1929, there was an FFA convention in Iowa.  A few years later in 1950, Congress granted FFA a federal charter, making it an integral, extracurricular part of public agricultural instruction under the National Vocation Education Acts. Females make up 43 percent of FFA members and 47 percent of state leadership positions.

Mrs. Amelon is a Teacher at CCAHS and MS. She teaches kids about the basics of FFA to the more complicated stuff.  When asked how Covid has affected FFA and this is what she has to say.  COVID pandemic has limited the number of opportunities that are available to Clear Creek Amana FFA members. During the 2020-2021 school year several contests and events were either canceled or adapted to limit the number of attendees. Thus Clear Creek Amana FFA could not take all students that were interested in a contest to the competition.

Within southeast Iowa, there are roughly 45 high schools that have the FFA program and among the state of Iowa, there are 248 FFA Chapters. Clear Creek Amana has been in the top half of nearly all of the competitive events that they have participated in since the FFA Chapter started. There is always room for improvement but as an FFA Chapter that has less than 5 years under its belt, we are well respected and do well at both Leadership and Skills Competitive Events.

Mrs. Amelon shares how the projects with her students are going and she had this to say. “Each student that is enrolled in an Ag Class and is an FFA member is required to have an SAE. An SAE is a supervised agricultural experience similar to a semester-long job shadow or internship. Most students keep their SAE for the duration of their time in FFA. This year we will most likely have 6 students receive their Iowa FFA Degree. That is the highest degree a student can earn within the FFA organization in regards to their project.”

Marinda Phan is a Sophomore at CCAHS one thing that Marinda is looking forward to in FFA is the ag sales part of it all. Marinda states that for competition, “You practice before or after school and then you go to the competition and it usually lasts the whole day.” There are many reasons that someone would join FFA. Some join because they like farming, Phan joined because she is interested in growing her leadership skills.

Now after high school, her plans are undecided if they will connect to FFA or not. . everyone has something they would say to someone that is interested ions something that they like for miss phan she had this to say, “Don’t be afraid to try new things because there are probably new people also doing it and Mrs. Amelon is very understanding.”